Which one of the following has the highest calorific value?

(a) magnesium oxide, water and light

(b) magnesium oxide and heat

Which of the following is not a combustible substance?

The substance that does not burn with flame is

On placing an inverted tumbler over a burning candle, the flame extinguishes after some time. This is because of nonavailability of

If a person’s clothes catches fire, the best way to extinguish the fire is to:

(a) throw water on the clothes.

(b) use fire extinguisher.

(c) cover the person with a woolen blanket.

(d) cover the person with a polythene sheet.

Choose the correct statement about inflammable substances from the following.

(b) high ignition temperature and can catch fire easily.

Choose the incorrect statement from the following. Forest fires are usually due to:

(a) carelessness of humans   (c) cutting of trees

(b) kilogram per mililitre  (d) kilojoule per kilogram

In villages, people use wood as fuel because:

(a) it is considered to be an ideal fuel.

(b) of its easy availability and low cost.

(c) it is environment friendly.

Which among the following is considered as the cleanest fuel?

Choose the incorrect statement from the following.

A good fuel is one which:

(a) is readily available.

(b) produces a large amount of heat.

(c) leaves behind many undesirable substances.

(d) burns easily in air at a moderate rate.

Shyam was cooking potato curry on a chulha. To his surprise he observed that the copper vessel was getting blackened from outside. It may be due to:

(a) proper combustion of fuel.

(b) improper cooking of potato curry.

(c) improper combustion of the fuel.

Fill in the blanks in the following sentences.

Some words (underlined) in the following sentences are jumbled up. Write them in their correct form.

(a) Seldie is a combustible substance.

(b) Slags is a non-combustible material.

(c) Chittsmack does not burn by itself.

(d) Some substances on combustion produce thea and mafel.

(e) The amount of heat energy produced on complete combustion of 1 kg of a fuel is called its ficalroic value.

Two glass jars A and B are filled with carbon dioxide and oxygen gases, respectively. In each jar a lighted candle is placed simultaneously. In which jar will the candle remain lighted for a longer time and why?

In jar B, because oxygen is a supporter of combustion.

Anu wants to boil water quickly in a test tube. On observing the different zones of the flame, she is not able to decide which zone of the flame will be best for boiling water quickly. Help her in this activity.

Anu should keep her test tube in the outermost zone which is the hottest part of the flame.

Why is the use of diesel and petrol as fuels in automobiles being replaced by Compressed Natural Gas (CNG) in big cities?

It is becuase CNG produces harmful products in very small amount and is a cleaner fuel.

Boojho wants to separate the following materials as combustible and non-combustible. Can you help him?

Indicate whether the following statements are True or False. Also write the false statements in their correct form.

(a) Air is necessary for combustion.

(b) Magnesium is a non-combustible metal.

(d) Calorific value of wood is higher than that of coal.

(b) Magnesium is a combustible metal

(d) Calorific value of coal is higher than that of wood. 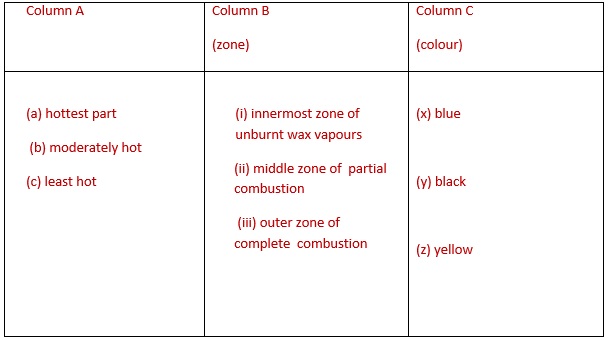 Match the following for the flame of a candle.

If you hold a piece of iron wire with a pair of tongs inside a candle flame or a Bunsen burner flame, what will you observe? Will it produce a flame?

Iron wire will become red hot and glow. It will not produce a flame.

Fill in the blanks using the words given in the box.

(a) A chemical process in which a substance reacts with oxygen to give off heat is called __________.

(c) The lowest temperature at which a substance catches fire is called its __________ temperature.

People usually keep Angethi/burning coal in their closed rooms during winter season. Why is it advised to keep the door open?

Due to insufficient availability of oxygen in the closed room carbon monoxide gas is produced which can kill persons sleeping in that room.

Write True/False against the following statements and also correct the false statement.

(a) A physical process in which a substance reacts with oxygen to give off heat is called combustion.

(b) Water is the best extinguisher for fires involving electrical equipment.

(d) Increased concentration of nitrogen in air is believed to cause global warming.

(e) Greater the calorific value, better is the fuel.

(f) Middle zone is the hottest zone of a flame.

(g) The substances which vapourise during burning, give flame.

(a) False – A chemical process in which a substance reacts with oxygen to give off heat is called combustion.

(b) False – Carbon dioxide is the best extinguisher for fires involving electrical equipment.

(f) False – outer zone is the hottest zone of a flame.

Cracker on ignition produces sound. Why?

Hint: Sudden formation of large amount of gas due to chemical reactions.

What do you understand by fuel efficiency?

You are provided with three watch glasses containing milk, petrol and mustard oil, respectively. Suppose you bring a burning candle near these materials one by one, which material(s) will catch fire instantly and why?

Hint: Pertrol will catch fire instantly because it is highly inflammable.

Manu was heating oil to fry potato chips. The cooking oil all of a sudden caught fire; he poured water to extinguish the fire. Do you think this action was suitable. If yes, why? If not, why not? In such a condition what should Manu have done?

What are the three essential requirements to produce fire? How fire extinguisher is useful for controlling the fire.

The job of fire extinguisher is to cut off the supply of air or to bring down the temperature of fuel or both.

Give two examples each for a solid, liquid and gaseous fuel alongwith some important uses.

The calorific values of petrol and CNG are 45000 kJ/kg and 50,000 kJ/kg, respectively. If you have vehicle which can run on petrol as well as CNG, which fuel will you prefer and why?

Hint: CNG, because the calorific value of CNG is higher than that of petrol. Therefore CNG will be more economical. At the same time it produces the least air pollutants.

Although wood has a very high calorific value, we still discourage its use as a fuel. Explain.

(ii)  Use of wood as fuel encourages cutting of trees leading to deforestation.

Forest fire produces a lot of air pollution. Write in brief about the reasons of forest fires.

Complete the crossword Fig. 6.1 with the help of the clues: 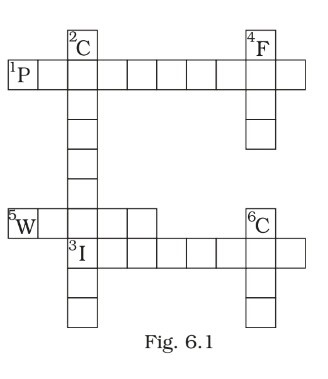 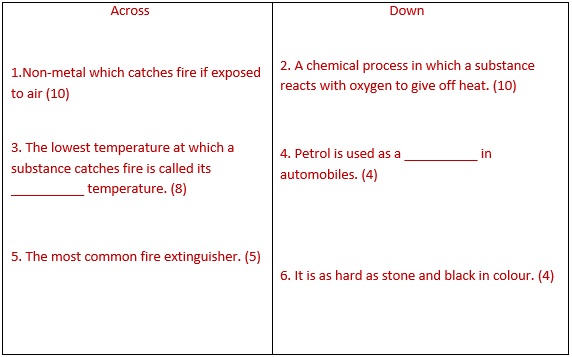 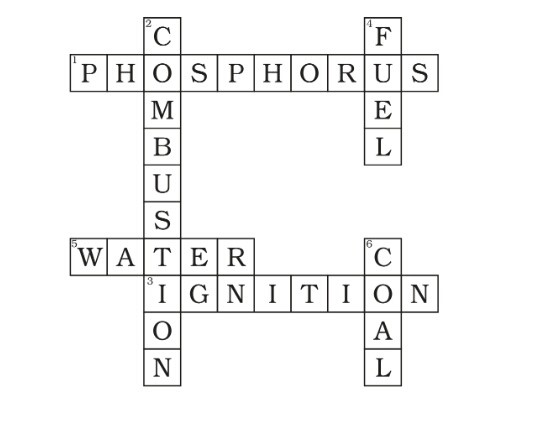