An electric current can produce

(a) heating effect only.

(b) chemical effect only.

Boojho and Paheli performed experiments taking similar bulbs and cells but two different solutions A and B as shown in Fig.14.1 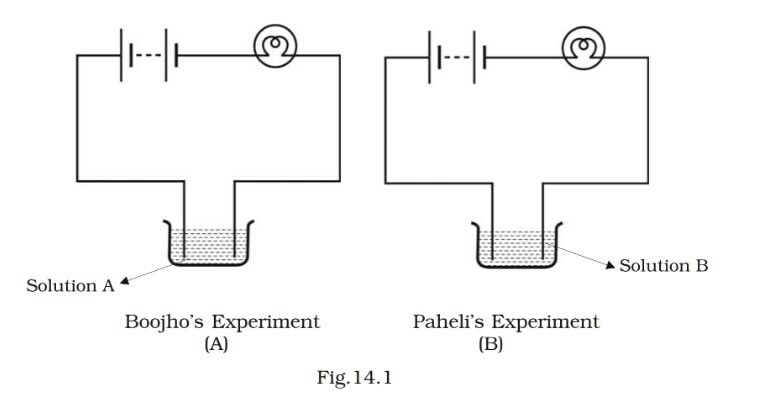 They found that the bulb in the setup A glows more brightly as compared to that of the setup B. You would conclude that

(a) higher current is flowing through the circuit in setup A.

(b) higher current is flowing through the circuit in setup B.

(c) equal current is flowing through both the circuits.

(d) the current flowing through the circuits in the two setups cannot be compared in this manner.

Boojho’s uncle has set up an electroplating factory near his village. He should dispose off the waste of the factory

(a) in the nearby river.

(c) in the nearby cornfield.

(d) according to the disposal guidelines of the local authority.

When electric current is passed through a conducting solution, there is a change of colour of the solution. This indicates

(a) the chemical effect of current.

(b) the heating effect of current.

(c) the magnetic effect of current.

(d) the lightning effect of current.

Which one of the following solutions will not conduct electricity?

Which of the following metals is used in electroplating to make objects appear shining? 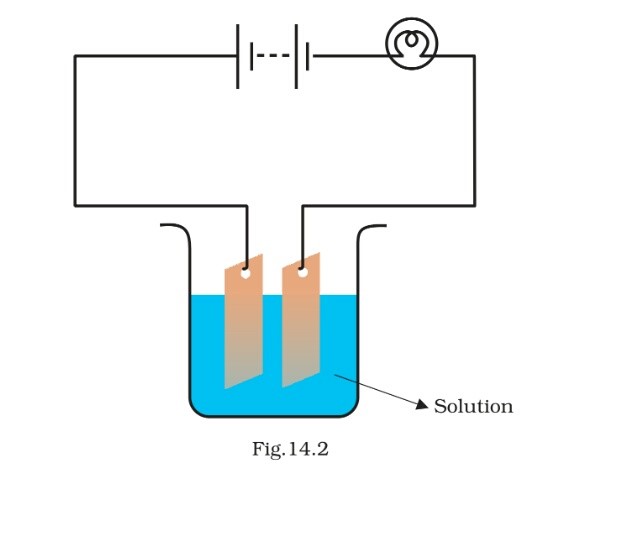 Which of the following solutions will not make the bulb in Fig 14.2 glow?

Fill in the blanks

Why is a layer of zinc coated over iron?

A coating of zinc is provided to protect iron from corrosion and rust.

Will the solution of sugar in distilled water conduct electricity?

Name the effect of current responsible for the glow of the bulb in an electric circuit.

Boojho made the circuit given in Fig. 14.3 and observed that the bulb did not glow. On Paheli’s suggestion he added one more cell in the circuit. The bulb now glows. Explain. 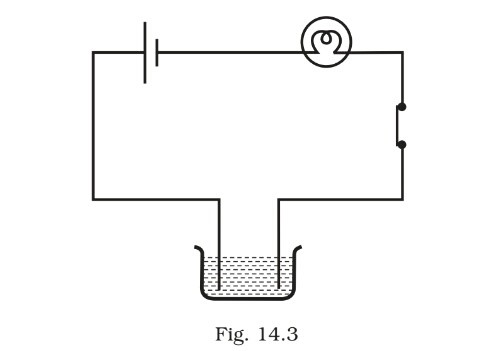 Addition of another cell increased the current through the bulb sufficiently to make it glow.

Paheli set up an experiment using liquid A in the beaker as shown in Fig. 14.4. She observed that the bulb glows. Then she replaced the liquid A by another liquid B. This time the bulb did not glow. Boojho suggested replacing the bulb by an LED. They observed that the LED glows. Explain. 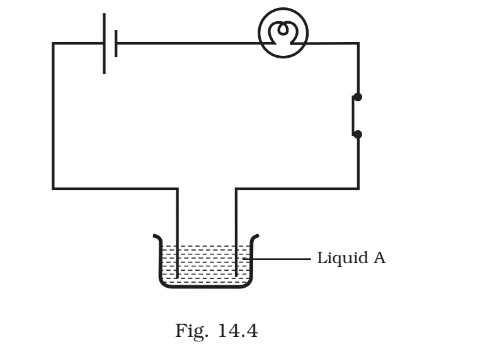 The current through liquid B could be weak and therefore unable to make the bulb glow. However, it was strong enough for the LED to glow.

Paheli wants to deposit silver on an iron spoon. She took silver nitrate (AgNO3) solution in a beaker and setup a simple circuit for electroplating. Which terminal of the battery should the spoon be connected to? What material should the other electrode be made of?

The spoon should be connected to the negative terminal of the battery. The other electrode should be made of silver.

Why is tin electroplated on iron to make cans used for storing food?

Tin is less reactive than iron. Tin coating prevents food from coming in contact with iron and thus prevents it from getting spoiled. 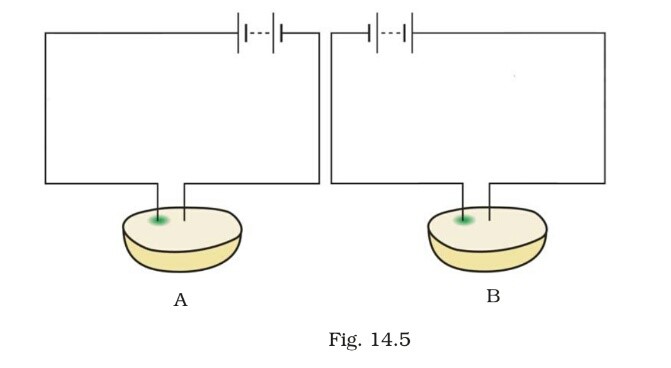 Which of these two circuits A or B shows the correct observation?

Diagram A shows the correct observation.

Observe the following circuits carefully. In which circuit will the bulb glow. Write ‘Yes’ or ‘No’ in the blank space provided along each of the circuit given in Fig. 14.6. 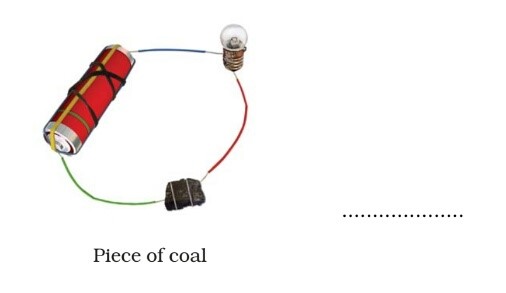 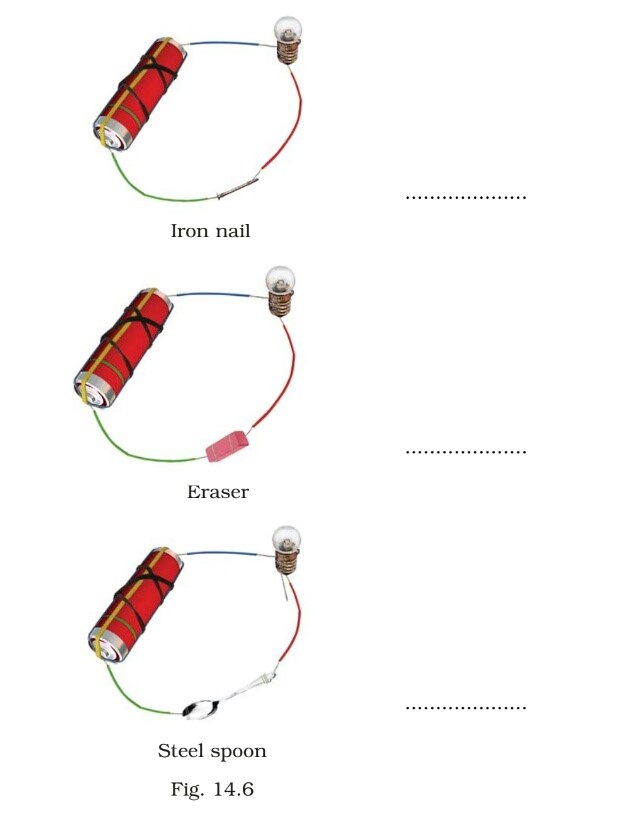 An electric current is passed through a conducting solution. List any three possible observations.

In the circuit given as Fig. 14.7, Boojho observed that copper is deposited on the electrode connected to the negative terminal the battery. Paheli tried to repeat the same experiment. But she could find only one copper plate. Therefore she took a carbon rod as negative electrode. Will copper be still deposited on the carbon rod? Explain your answer. 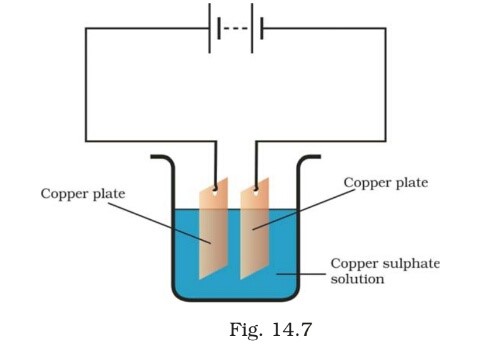 Observe the circuit given in Fig. 14.8

Boojho set up this circuit for purification of copper. What will be the nature of – (i) plate A (ii) plate B (iii) the solution.

Explain the process of purification.

Observe the following circuit given in Fig. 14.9. 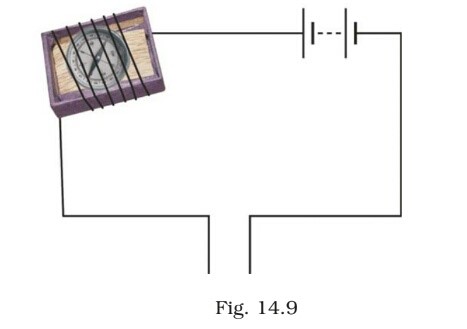 Current does not flow in the circuit if there is a gap between the two wires. Does it indicate that air is a poor conductor of electricity? Does air never conduct electricity? Explain.

Yes, air is a poor conductor of electricity. No, under certain conditions, such as during lightning, air may conduct electricity.

Boojho made the circuit shown in Fig. 14.10. He wanted to observe what happens when an electric current is passed through water. But he forgot to add a few drops of lemon juice to water. Will it make any difference to his observations? Explain.

Observing that the bulb does not glow in the circuit shown in Fig. 14.11 A, Boojho changed the circuit as shown in Fig 14.11 B. He observed deflection in the magnetic compass. 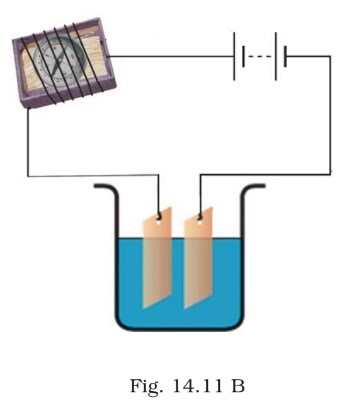 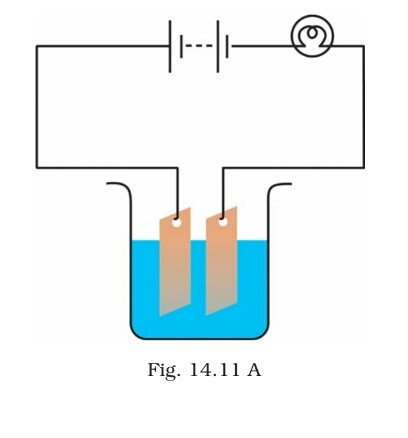 You are provided with a magnetic compass, an empty match box, a battery of two cells and connecting wires. Using these objects how will you make a tester for testing an electric circuit? Draw the necessary circuit diagram and explain. 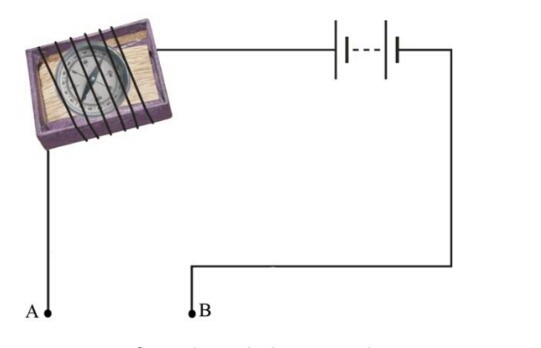 Whenever current flows through the circuit the megnetic compass needle shows deflection due to magnetic effect of current.