Question 3. Which of the following is a pair of exhaustible natural resources.

(b) air and sun-light  (d) wild life and minerals

Question 4. Coal is processed in industries to get some useful products. Which of the following is not obtained from coal?

(a) unlimited in quantity.

(b) not dependent on nature.

(d) not exhausted by human activities.

Question 6. Fossil fuels are obtained from:

(a) remains of non-living materials.

(b) dead remains of birds only.

(c) dead remains of insects only.

Question 7. Coal is formed from the remains of

(b) animals only  (d) neither vegetation nor animals

Question 8. Which substance is formed by the carbonisation of dead vegetation?

Question 9. Naphthalene balls are obtained from coal tar and are used as

Question 10. Which of the following is not a constituent of petroleum?

Question 11. Petroleum was formed from organisms:

Question 12. Choose the correct statement from the following:

(a) It is difficult to transport natural gas through pipes.

(b) The disadvantage of natural gas is that it can not be used directly for burning in homes.

Question 13. You are provided with a mixture of petroleum and water. Can you suggest a method to separate the two?

Question 14. What does CNG stand for and why is it considered to be a better fuel than petrol?

Answer 14. CNG stands for Compressed Natural Gas. It is considered to be a better fuel because it is less polluting.

Answer 15. Kerosene is used as fuel for stoves, lamps and jet aircrafts.

Question 16. Fill in the blanks in the following sentences.

Question 17. The underlined words in the following sentences have been jumbled up. Write them in their correct form.

(a) Loca is obtained from mines.

(b) Umpetlore is a fossil fuel.

(c) Rineryfe is a place where various fractions of peroleum are separated.

(d) Keenrose is a fuel used in jet crafts.

(e) Nutsgilh is an example of inexhaustible natural resources.

Question 18. Fill in the blanks.

(a) The slow process of conversion of dead vegetation into coal is called__________.

(b) Coal and petroleum are formed from the dead remains of organisms and are known as __________.

(e) The process of separating the various constituents of petroleum is known as __________.

(a) Oxygen in air is an exhaustible natural resource.

(b) Resources which are present in unlimited quantity in nature are called exhaustible natural resources.

(d) Under high temperature and pressure, dead plants get slowly converted to coal.

(e) CNG is less polluting fuel than petrol and diesel.

Answer 20.  These resources are present in unlimited quantity in nature and are not likely to be exhausted by human activities.

Answer 22. . It is used for extraction of many metals and also for the manufacture of steel.

Question 23. Write the characteristics and some important uses of coal.

Answer 23.  Coal is black in colour and hard as stone. It is one of the fuels used to cook food. Earlier it was used in railway engines to produce steam to run the engine. It is used as fuel in thermal power plants to produce electricity and in various other industries.

Question  24. Look at Fig. 5.1 where petroleum and natural gas deposits are shown. Why do we find oil layer above water layer? 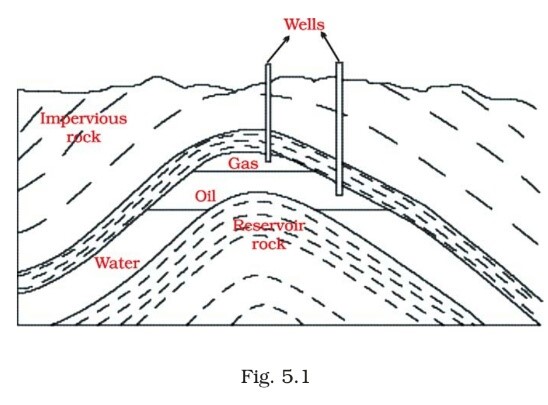 Answer 24.  Hint: Oil is lighter than water hence floats over it.

Question 25. Fill in the blanks and complete the story.

Question 26. Match the items given in Column I with the items of Column II.

Question 27. Name the products obtained and their uses when coal is processed in industry.

Coke is used in the manufacture of steel and in extraction of many metals.

Coal gas is used as fuel.

Question 28. We say fossil fuels will last only for a few hundred years. Comment.

Answer 28.  It takes a very long time for the formation of fossil fuels. It also requires specific conditions and it doesn’t happen quite often. Therefore, their limited stock will last only for a few hundred years.

Question 29. We read in newspapers that burning of fuels is a major cause of global warming. Explain why.

Answer 29.  Hint: It is related to global warming due to formation of carbon dioxide and some other gases.

Question 30. While driving what are the tips we must follow to save petrol/ diesel/natural gas?

Questuion 31. Imagine that all the exhaustible natural resources are exhausted by human activities. Do you think survival of living beings would be possible.? If yes, why?, If not, why not?

Answer 31. This is an open ended question. Let children imagine and write.

Question 32. Why petrol is exhaustible natural resource, whereas sunlight is not? Explain.

Answer 32. Hint: Sunlight is present in unlimited quantity in nature whereas it takes millions of years to form petrol from dead remains of organisms.

Questuion 33. Write some important uses of the various constituents of petroleum.

Question 34. Coal reserves are said to be enough to last for another hundred years. Do you think we need to worry in such case? Why or why not?

Question 35. What steps would you suggest for the judicious use of fossil fuels?

Question 36. Complete the crossword Fig. 5.2 with the help of the clues. 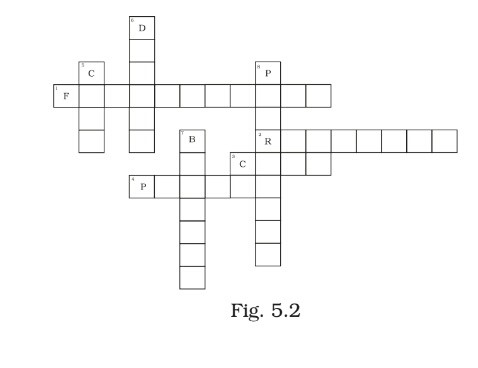 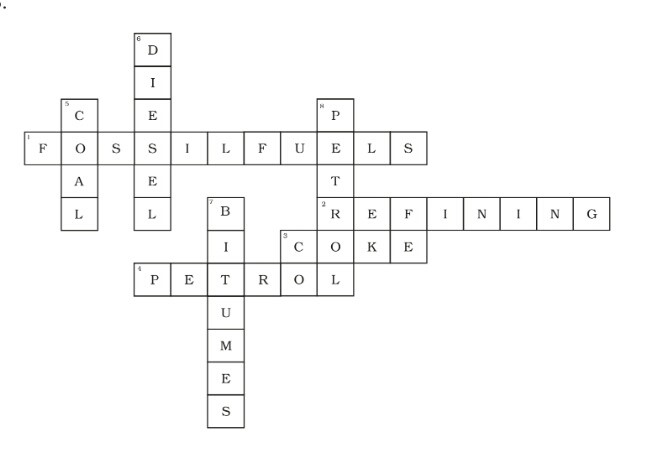