Chapter 18: Pollution of Air and Water

Chapter 18: Pollution of Air and Water

Air is a mixture of various gases. One of the gases is 21% part of the air and is essential for the survival of human beings. This gas is

Which of the following is not a source of air pollution?

Boojho wishes to contribute in reducing air pollution. Which vehicle should he use for going to school?

Which of the following is not a way to conserve water?

Incomplete combustion of fuel such as petrol and diesel gives

The phenomenon of marble cancer is due to

Potable water is the water which is

Which of the following procedures will give you water free from all impurities?

A pond contains clean water. Which of the following activities will produce least pollution of water?

(a) washing clothes in the pond

(b) animals bathing in the pond

(d) swimming in the pond.

Trees help in reducing the pollution of our environment. Lakhs of trees are planted by people in the month of July every year. The occasion is called

Which of the following is not a green house gas?

Name the chemicals which are used in refrigerators and air conditioners and damage ozone layer when released in air.

Name any two sources which cause air pollution due to suspended particulate matter.

Name two gases which are mainly responsible for acid rain?

The quality of air at various locations is monitored regularly by government and other agencies? In what way can you use these data?

These data can be used to generate awareness about air pollution among people.

Combustion of fossil fuels generates a lot of air pollution. Can you suggest any two alternative sources of energy which do not cause any pollution?

Name any two water pollutants which are toxic for plants and animals.

A lot of dry leaves are collected in a school garden and are burnt every day. Do you think that it is right to do so? If not, what should be done to dispose off the dry leaves?

It is not right to burn dry leaves as it causes air pollution. The right way to dispose off the dry leaves is to convert them into compost.

The level of air pollution is higher at a busy traffic intersection. Why?

A large number of automobiles stop for a short period at red light through out the day and release a large quantity of gases which create air pollution.

Fill in the blanks with the help of words given in bracket after each sentence.

Match the items of Column A with those of Column B.

Find out the wrong statements and write them in their correct form.

(a) We can survive for some time without air but we cannot survive even for a few minutes without food.

(b) A brick kiln emits lot of smoke and other harmful gases causing air pollution.

(c) Carbon monoxide is produced by complete burning of fuels such as coal, petrol, diesel.

(d) Chlorination is a commonly used chemical method for killing germs in water.

(e) Water which is suitable for drinking is called soft water.

Statements (b) and (d) are correct statements. The correct form of statements (a), (c) and (e) are as follows

(a) We can survive for some time without food but we cannot survive even for a few minutes without air.

(c) Carbon monoxide is produced by incomplete burning of fuels such as coal, petrol, diesel.

(e) Water which is suitable for drinking is called potable water.

In the following statements, the underlined words are jumbled up. Write them in their correct form. (a) Air contains 78% ginroten and 21% gonexy.

(d) Gangotri glacier in Himalaya has started melting because of lablog ringwam.

(e) Whenever harmful substances such as wagese, toxic chemicals, silt, etc. get mixed with water, the water becomes potdulle.

What do CFCs stand for? Name some devices where CFCs are used. Why CFCs are considered as pollutants?

– Damage the ozone layer of the atmosphere.

Why is it advised that industries should switch over to cleaner fuels such as CNG and LPG in the Taj Mahal Zone in Agra?

Hint: Pollutants in air are discolouring white marble of Taj Mahal. The pollutants like sulphur dioxide and nitrogen dioxide react with the water vapour present in the atmosphere to form sulphuric acid and nitric acid respectively.

It is said, "CO2 contributes to global warming." Explain.

Hint: CO2 takes heat and does not allow it to escape into space. As a result, the average temperature of the earth’s atmosphere is gradually increasing.

We should plant trees and nurture the ones already present in the neighbourhood. Why?

Explain the traditional way of purifying water to make it fit for drinking.

How can we reduce, reuse and recycle water?

Reduce – While brushing your teeth, bathing etc.. we should not keep our taps on.

Reuse – Water used for washing vegetables, rice etc. can be used for gardening.

Recycle – Dirty water can be recycled after purification.

Read the paragraph and answer the questions following it.

Water is essential for life. Without water there would be no life. We usually take water as granted for its purity, but we must ensure the quality of water. Pollution of water originates from human activities. Through different paths, pollution reaches to ground water. Easily identified source or place of pollution is called as point source, e.g.– municipal and industrial discharge pipes, where pollutants enter the water source. Non–point sources of pollution are those where a source of pollution can not be easily identified, e.g.– agricultural run off, acid rain etc.

(i) How do you classify the various sources of water pollution?

(ii) What are the point sources of water pollution?

Complete the crossword puzzle with the help of clues given below: 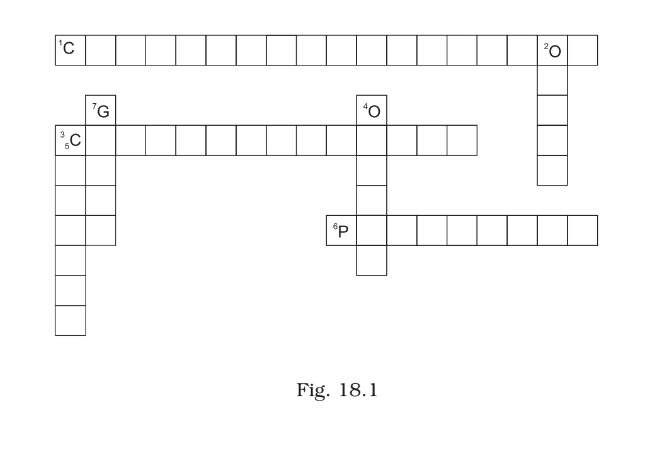 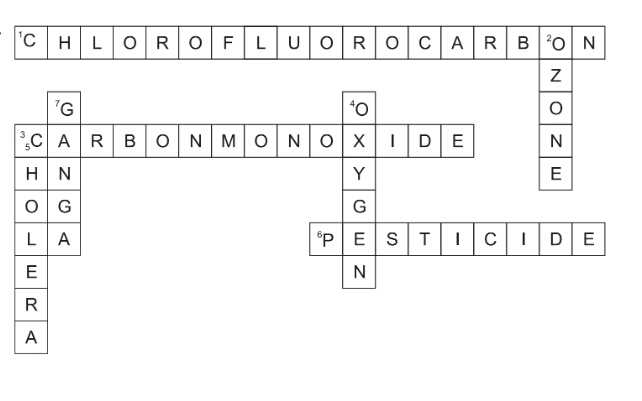