Whenever the surfaces in contact tend to move or move with respect to each other, the force of friction comes into play

(a) only if the objects are solid.

(b) only if one of the two objects is liquid.

(c) only if one of the two objects is gaseous.

(d) irrespective of whether the objects are solid, liquid or gaseous. 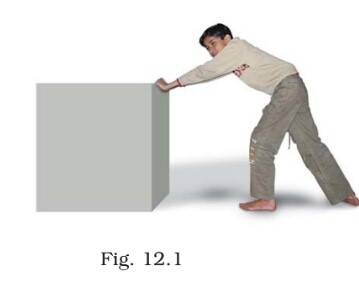 In Fig.12.1, a boy is shown pushing the box from right to left. The force of friction will act on the box

(a) from right to left  (c) vertically downwards

(b) from left to right  (d) vertically upwards

To sharpen the blade of a knife by rubbing it against a surface, which of the following will be most suitable?

If we apply oil on door hinges, the friction will

(b) decrease   (d) will remain unchanged

Which of the following statements is incorrect?

(a) Friction acts on a ball rolling along the ground.

(b) Friction acts on a boat moving on water.

(c) Friction acts on a bicycle moving on a smooth road.

(d) Friction does not act on a ball moving through air.

(a) spread a carpet on the wooden surface.

(b) cover the ball with a piece of cloth.

Two blocks of iron of different masses are kept on a cemented floor as shown in Fig.12.2. Which one of them would require a larger force to move it from the rest position?

Larger force will be required to move the heavier block

Will force of friction come into play when a rain drop rolls down a glass window pane?

Two boys are riding their bicycles on the same concrete road. One has new tyres on his bicycle while the other has tyres that are old and used. Which of them is more likely to skid while moving through a patch of the road which has lubricating oil spilled over it?

The bicycle with worn out tyres is more likely to skid.

Fig.12.3 shows two boys applying force on a box. If the magnitude of the force applied by each is equal, will the box experience any force of friction? 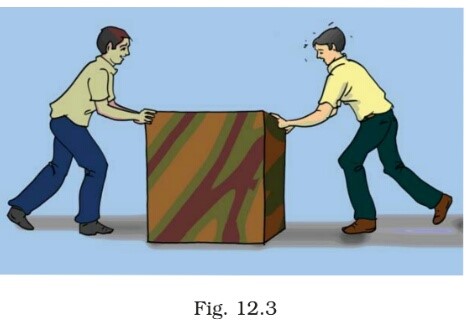 Force of friction will be zero as the net force on the box is zero.

Imagine that an object is falling through a long straight glass tube held vertical; air has been removed completely from the tube. The object does not touch the walls of the tube. Will the object experience any force of friction?

You might have noticed that when used for a long time, slippers with rubber soles become slippery. Explain the reason.

When rubber soles are used for a long time, their surfaces become smooth. Hence, the friction between the sole and the floor decreases. Therefore, slippers become slippery.

Yes, rolling friction. If an air cushion is introduced between the wheel and the rails, the friction will decrease.

Cartilage is present in the joints of our body, which helps in their smooth movement. With advancing age, this cartilage wears off. How would this affect the movement of joints?

The wearing off of cartilage will increase the friction. As a result the movement of joints will become difficult which may lead to joint pains.

While playing tug of war (Fig.12.4), Preeti felt that the rope was slipping through her hands. Suggest a way out for her to prevent this.

She may rub soil to increase friction between the rope and her hand. 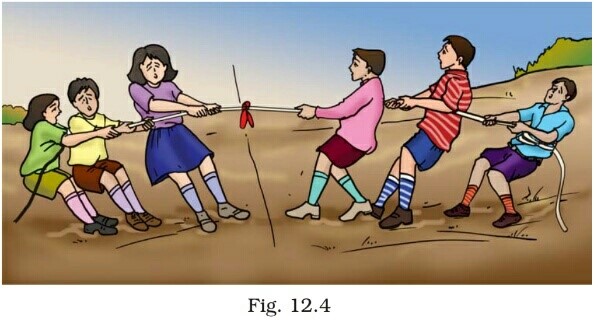 The handle of a cricket bat or a badminton racquet is usually rough. Explain the reason.

To increase friction between handle of the bat and hands, to have a better grip.

Explain why the surface of mortar and pestle (silbatta) used for grinding is etched again after prolonged use?

To increase friction to make it more effective for grinding again.

On the surface covered with sand, it will cover the least distance because sand offers maximum friction against its motion.

A father and son pushed their car to bring it to the side of road as it had stalled in the middle of the road. They experienced that although they had to push with all their might initially to move the car, the push required to keep the car rolling was smaller, once the car started rolling. Explain.

When the cutting edge of a knife is put against a fast rotating stone to sharpen it, sparks are seen to fly. Explain the reason.

Friction between grinding stone and the cutting edge of the knife produces heat. As the friction is very large in this case, a large amount of heat is produced and we see sparks flying.

While travelling on a rickshaw, you might have experienced that if the seat cover is very smooth, you tend to slip when brakes are applied suddenly. Explain.

If the seat cover is very smooth then the friction between our body and the seat is very small. Therefore, when the brakes are applied we tend to slip.

Two friends are trying to push a heavy load as shown in Fig.12.5. Suggest a way which will make this task easier for them. Fig. 12.5 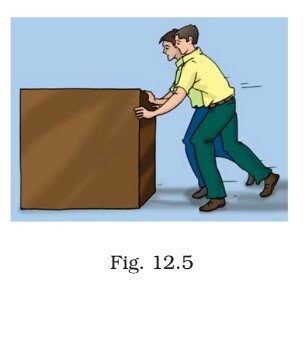