Question 1. Which of the following reproduces only inside a host cell?

Question 4. The two micro-organisms which live in symbiotic association in lichens are

Question 5. The gas released during the preparation of bread is

Question 7. Paheli dug two pits, A and B, in her garden. In pit A, she put a polyhtene bag packed with some agricultural waste. In pit B, she dumped the same kind of waste but without packing it in a polythene bag. She then covered both the pits with soil. What did she observe after a month?

(a) Waste in pit A degraded faster than that in pit B.

(b) Waste in pit B degraded faster than that in pit A.

(d) Waste in both pits did not degrade at all.

Question 8. Unscramble the jumbled words underlined in the following statements.

(a) Cells of our body produce santiidobe to fight pathogens.

(b) curbossulite is an air-borne disease caused by a bacterium.

(d) Yeasts are used in the wine industry because of their property of meronettinaf.

Suggest a suitable word for each of the following statements.

(a) Chemicals added to food to prevent growth of microorganisms.

(b) Nitrogen-fixing microorganism present in the root nodules of legumes.

(c) Agent which spreads pathogens from one place to another.

(d) Chemicals which kill or stop the growth of pathogens.

Column A   Column B

(a) Louis Pasteur   (i) Penicillin

Question 11. Name one commercial use of yeast.

Question 12. Name the process in yeast that converts sugars into alcohol.

Question 13. In the soil, which nutrient is enriched by blue-green algae (cyanobacteria)?

Question 14. Why should we avoid standing close to a tuberculosis patient while he/she is coughing?

Answer 14 Tuberculosis is an air-borne disease which easily spreads when the infected person coughs.

Question 15. Polio drops are not given to children suffering from diarrhoea. Why?

Answer 15 If the child is suffering from diarrhoea, the orally given vaccine may be excreted out because of frequent motions.

Question16. Paheli watched her grandmother making mango pickle. After she bottled the pickle, her grand mother poured oil on top of the pickle before closing the lid. Paheli wanted to know why oil was poured? Can you help her understand why?

Answer 16 Oil prevents bacteria from attacking the pickle and spoiling it.

Question 17. Match the microorganisms given in the Column A to the group to which they belong in Column B.

Column A   Column B

Question 19. While returning from the school, Boojho ate chaat from a street hawker. When he reached home, he felt ill and complained of stomach ache and fell ill. What could be the reason?

The probable reason is that the chaat was contaminated by pathogenic microbes due to unhygienic conditions near the shop or the utensil used for serving could have contaminated.

Question 20. What will happen to ‘pooris’ and ‘unused kneaded flour’ if they are left in the open for a day or two?

The ‘unused kneaded flour’, if left in warm conditions, gets infected by microbes which cause fermentation and spoils the flour. The pooris would remain in relatively good condition because they were deep fried in heated oil that kills microbes.

Question 21. (a) Name two diseases that are caused by virus.

(b) Write one important characteristic of virus.

Virus can reproduce only inside the cells of host.

Question 22. Observe the Fig.2.1 and answer the questions that follows. 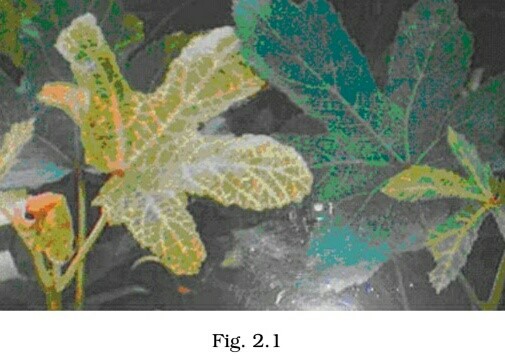 (a) Write the name of the disease.

(b) Name the causative agent of this disease?

(c) How does the disease spread from one plant to another?

(d) Name any two plant diseases and the microbes that cause them.

(c) The disease spreads from one plant to another through insects.

(ii) Rust of wheat caused by fungus or any other disease

Question 23. How do vaccines work?

Vaccines contain dead or weakened microbes of a particular disease. When a vaccine is introduced into a healthy body, the body fights and kills them by producing suitable antibodies. These antibodies remain in the body and protect it when the microbe enters the body again.

Question 24. Observe the set up given in Fig. 2.2 and answer the following questions. 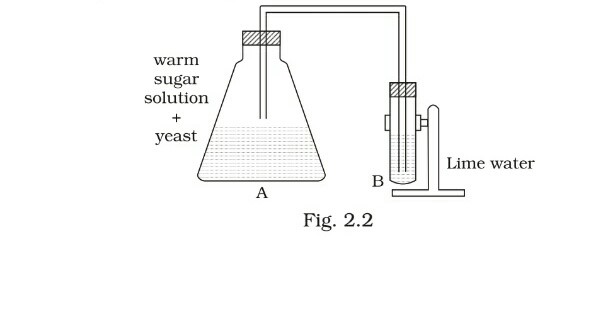 (a) What happens to the sugar solution in A?

(b) Which gas is released in A?

(c) What changes will you observe in B when the released gas passes through it?

Question 25. Observe the Fig.2.3 and answer the following questions. 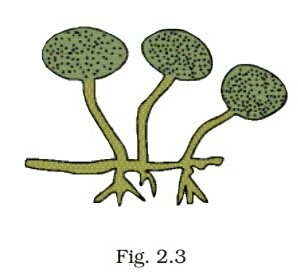 (a) Name the microorganism and the group to which it belongs.

(b) Name the food item on which the organism grows.

(c) Does it grow well in dry or in moist conditions?

(d) Is it safe to eat infected bread?

(b) Moist and stale bread.

(d) No, the fungus spoils the bread by producing poisonous substances.

Question 26. Give reasons for the following.

(a) Fresh milk is boiled before consumption while processed milk stored in packets can be consumed without boiling.

(b) Raw vegetables and fruits are kept in refrigerators whereas jams and pickles can be kept outside.

(d) Mosquitoes can be controlled by preventing stagnation of water though they do not live in water. Why?

(a) Fresh milk is boiled before consumption to kill the microorganisms in it. But packed milk is pasteurised and does not contain any microorganisms. It can thus be consumed without boiling.

(b) Raw vegetables and fruits get easily infected by microorganisms and get spoilt. They are kept in refrigerator  as low temperature inhibits growth of microbes. Jams and pickles contain sugar and salt as preservatives. They do not get infected by microbes easily.

(c) Beans and peas are leguminous plants and have Rhizobium in their root nodules. These bacteria can fix atmospheric nitrogen to enrich the soil with nitrogen and increase its fertility.

(d) Though mosquitoes live on land, their larvae grow in water. If water stagnation is prevented the larvae cannot survive.

Question 27. How can we prevent the following diseases?

(a) Cholera: By maintaining personal hygiene and good sanitation practices.

(c) Hepatitis A: Drinking boiled water and getting vaccinated against the disease. 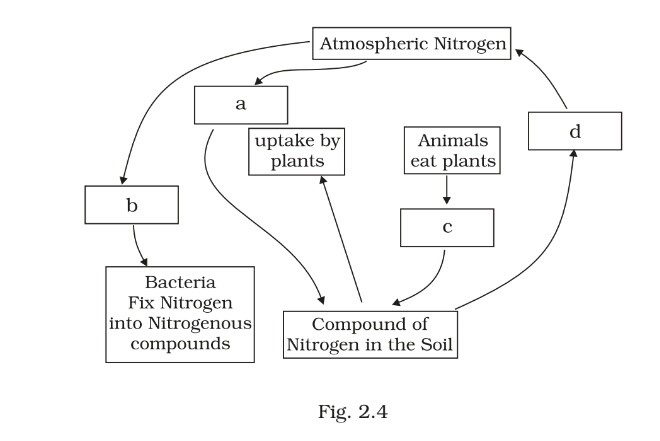