Which of the following correctly represent the electronic distribution in the Mg atom?

(c) Nucleus in the atom

The number of electrons in an element X is 15 and the number of neutrons is 16. Which of the following is the correct representation of the element?

(i) Law of conservation of mass

Which of the following statements about Rutherford’s model of atom are correct?

(i) considered the nucleus as positively charged

(iii) can be compared to solar system

(iv) was in agreement with Thomson’s model

Which of the following are true for an element?

(i) Atomic number = number of protons + number of electrons

In the Thomson’s model of atom, which of the following statments are correct?

(iii) the electrons are uniformaly distributed in the positively charged sphere

(iv) the electrons attract each other to stabilise the atom

(i) electrons have negative charge

(iii) neutron exists in the nucleus

(iv) most of the space in atom is empty

Which of the above statements are correct?

The ion of an element has 3 positive charges. Mass number of the atom is 27 and the number of neutrons is 14. What is the number of electrons in the ion?

Identify the Mg2+ ion from the Fig.4.1 where, n and p represent the number of neutrons and protons respectively 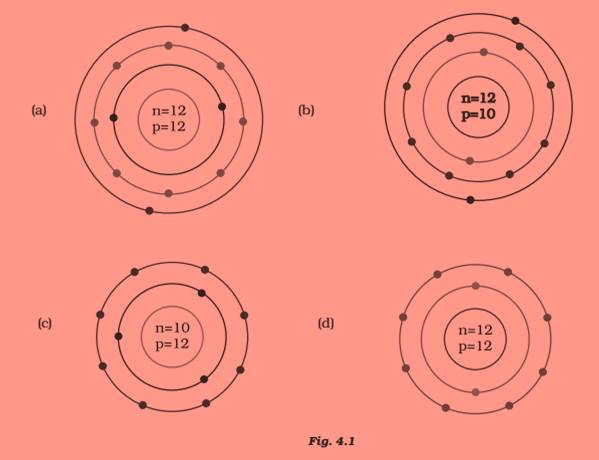 In a sample of ethyl ethanoate (CH3COOC2H5 ) the two oxygen atoms have the same number of electrons but different number of neutrons. Which of the following is the correct reason for it?

(a) One of the oxygen atoms has gained electrons

(b) One of the oxygen atoms has gained two neutrons

Elements with valency 1 are

(c) either metals or non-metals

The first model of an atom was given by

The electron distribution in an aluminium atom is

Which of the following in Fig. 4.2 do not represent Bohr’s model of an atom correctly?

Which of the following statement is always correct?

(a) An atom has equal number of electrons and protons.

(b) An atom has equal number of electrons and neutrons.

(c) An atom has equal number of protons and neutrons.

(d) An atom has equal number of electrons, protons and neutrons.

Atomic models have been improved over the years. Arrange the following

atomic models in the order of their chronological order

Is it possible for the atom of an element to have one electron, one proton and no neutron. If so, name the element.

Yes, it is true for hydrogen atom which is represented as 1 1H

Write any two observations which support the fact that atoms are divisible.

Hint— Discovery of electrons and protons

Will 35Cl and 37Cl have different valencies? Justify your answer.

Why did Rutherford select a gold foil in his α–ray scattering experiment? 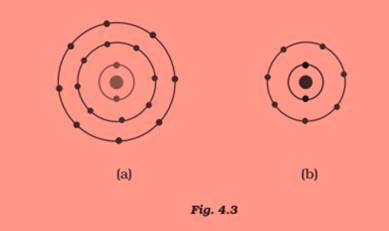 Write down the electron distribution of chlorine atom. How many electrons are there in the L shell? (Atomic number of chlorine is 17).

In the atom of an element X, 6 electrons are present in the outermost shell. If it acquires noble gas configuration by accepting requisite number of electrons, then what would be the charge on the ion so formed?

What information do you get from the Fig. 4.4 about the atomic number, mass number and valency of atoms X, Y and Z? Give your answer in a tabular form.

Hint— No, the statement is incorrect. In an atom the number of protons and electrons is always equal.

(a) Ernest Rutherford  (i) Indivisibility of atoms

The atomic number of calcium and argon are 20 and 18 respectively, but the mass number of both these elements is 40. What is the name given to such a pair of elements?

Complete the Table 4.1 on the basis of information available in the symbols

Helium atom has 2 electrons in its valence shell but its valency is not 2, Explain.

Helium atom has 2 electrons in its outermost shell and its duplet is complete. Hence the valency is zero.

Fill in the blanks in the following statements

(c) Neon and chlorine have atomic numbers 10 and 17 respectively. Their valencies will be——

(d) The electronic configuration of silicon is ———and that of sulphur is ———.

An element X has a mass number 4 and atomic number 2. Write the valency of this element?

Valency is zero as K shell is completely filled.

Why do Helium, Neon and Argon have a zero valency?

The ratio of the radii of hydrogen atom and its nucleus is ~ 105. Assuming the atom and the nucleus to be spherical, (i) what will be the ratio of their sizes? (ii) If atom is represented by planet earth ‘Re’ = 6.4 ×106 m, estimate the size of the nucleus.

Let R be the radius of the atom and r be that of the nucleus.

Enlist the conclusions drawn by Rutherford from his α-ray scattering experiment.

Rutherford's conclution from the α-particle scattering experiment that–

(i) Most of the space inside the atom is empty or vacant hence most of the α-particles passed through the gold foil without deflecting or deviating.

(ii) Very very few particles were deflected from their path, this indicates that all positive charges are occupies little space.

(iii) A very small fraction of α-particles were bounce of the nucleus indicates that both the positive charges and mass of the atom were concentrated in a very small portion within the atom.

In atom model proposed by Rutherford, the electrons revolve around the nucleus in a well-defined  circular orbits. There is a positively charged centre in an atom called the nucleus and  the size of the atom  is very big as compared to the size of the nucleus and nearly all the mass of an atom is centred in the nucleus. Whereas Thomson proposed an atom model which is similar to a plum pudding. The electrons are spread over the positively charged sphere like in pudding and the mass of the atom was supposed to be uniformly distributed.

What were the drawbacks of Rutherford’s model of an atom?

The orbital revolution of the electron is not expected to be stable. Any particle revolving in a circular orbit would undergo a acceleration and it would emit radition. As a result the electron revolving in the orbit would lose energy and finally fall into the nucleus. If this would happen the  atom should become highly unstable and it collapse. But this is not happen.

What are the postulates of Bohr’s model of an atom?

The postulates put forth by Neils Bohr’s about the model of an atom:

(i) Only certain special orbits known as discrete orbits of electrons, are allowed inside the atom.

(ii) While revolving in discrete orbits the electrons do not radiate energy.

These orbits are called energy levels. Energy levels in an atom are shown by circles.

Show diagramatically the electron distributions in a sodium atom and a sodium ion and also give their atomic number. 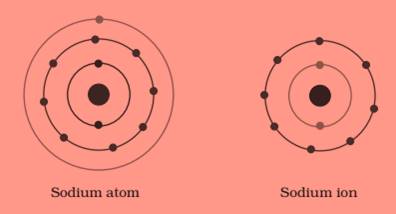 Number of particles that deflected at an angle less than 500